"The Solution" is in AI's Top 20 Waterparks

SureWater feeders are the feed system of choice for the top three, and four out of the top six waterparks in Aquatics International's 2008 Top 20 Waterparks list published in the September issue.

Number 6, Raging Waters in San Dimas, California installed their first Solution in January of 2003, then added a second system to their park in August of 2005. Number 3, Wet 'N Wild Orlando was the first waterpark in Florida to go with SureWater, installing their first of four feeders in June of 2003. Number 1, Disney's Typhoon Lagoon followed suit with the January 2004 installation of two Solutions, one each on their wave and river pools. Disney subsequently added three more Solutions at Typhoon Lagoon in 2005, and this year has placed Number 2, Blizzard Beach on SureWater feed systems with the installation of two Solutions. Isn't it great to know that as an owner/operator of "The Solution" Feed System, you are among some of the top operations in the country! Congratulations!

See the September issue of AI for the complete Top 20 list.
Posted by Chlorine Head at 3:46 PM No comments: 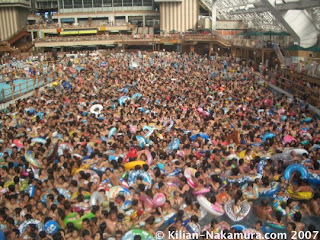 How many metering pumps does it take...?

This is an actual summer afternoon crowd in the indoor wave pool at Tokyo Summerland Water Adventure Park in Japan. And you thought your demand was difficult to keep up with! Click on the title above for the video. "Soup's on!"
Posted by Chlorine Head at 4:36 PM No comments:

Made in the USA for Operators everywhere!

Get "The Solution"
Authorized Reps